Blog - Latest News
You are here: Home1 / How a Holocaust symbol inspired the naming of PinkNews

PinkNews Chief Executive Benjamin Cohen explains the origin behind our name and calls for a national memorial to the LGBT victims of Nazi persecution to be built. 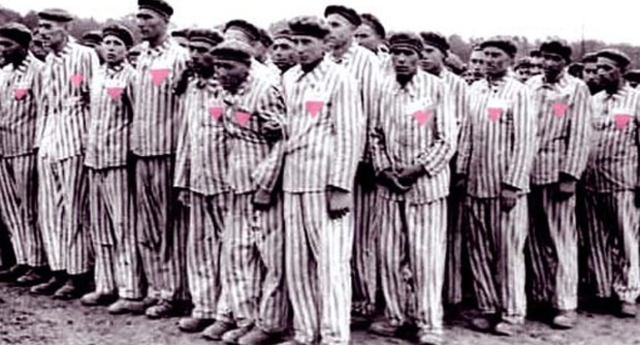 This year sees the tenth birthday of PinkNews. Ten years, we hope, of breaking news that matters and changing perceptions of LGBT media. But for the first time, ten years on, I’ve been asked to justify why we are called PinkNews.

In part, questions arose when the Independent on Sunday renamed its long standing list of LGBT people – who it says influences British life – from the Pink List to the Rainbow List. Its curator Katy Guest wrote: “A rainbow is more inclusive, less old-fashioned and far less like the ‘girls’ aisle in a toyshop, we hope.”

Paris Lees, who topped the final Pink List before the rebrand, defended the change in name writing in Attitude: “Pink, in case you hadn’t noticed, is supposed to be for girls… The idea that the gay community can be neatly summed up by the word pink, as in Pink Pound, suggests that it’s just a bunch of effeminate men.”

These statements go beyond simply perpetuating the damaging stereotype that pink is associated with girls. Pink after all, used to be a colour associated with boys. Just like the word gay, its meaning has changed. Gay used to be used to describe a ladies man. ‘Gay women’ were prostitutes in the 17th century.

But that’s not what made me upset.

The real issue that I have is that both Katy Guest and Paris Lees completely missed why pink matters to our community. The reason why many LGBT organisations like PinkNews are so named has nothing to do with the supposed campness of gay men, nor an alleged tendency to like girly products, and everything to do with the Holocaust, which ended with the liberation of Auschwitz, 70 years ago today.

The story of the pink triangle, which the Nazis forced gay men to wear, can never be told enough, and I feel bad that we perhaps don’t tell it enough ourselves in gay media. Thousands of gay men lost their lives in the Nazi persecution, which began for them with being forced to wear a pink triangle to mark them out from other enemies of the fascist state.

For us at PinkNews, calling ourselves ‘pink’ anything is an act of reclamation of a colour previously used by our enemies as an insult. It’s no different really from the way that queer has been reclaimed by some of the community more recently, from a term of abuse by homophobes to a word of pride.

We take pride in the fact that the colour associated with the most shocking and devastating act of persecution of gay people is now associated with what we believe to be a force for good. Our mission has always been to stand as a watchdog, highlighting injustice and exposing wrong doing. In a sense, our very existence stands to try and prevent history repeating itself, something that will always be harder to happen while there is strong and authoritative LGBT media.

For everyone who works at PinkNews in the UK or in the US whether they are gay, straight, bisexual or trans, the word pink has a special meaning. It reminds us constantly through every word typed on pinknews.co.uk, every email sent to a PinkNews email address and every time the phone is answered why we as an organisation must exist. We take pride, that realise it or not, this symbol is shown to the five to six million people from around the world who visit PinkNews each and every month.

Keeping the pink flag flying as an act of remembrance to the persecution of gay people by the Nazis matters now more than ever. In 2012, the last gay survivor of the concentration camps, Gad Beck died. We owe it to his memory to constantly be telling the story of the Holocaust.

Last year, the Prime Minister announced the formation of the Holocaust Commission with a mission to create a permanent memorial to the Holocaust in Britain and increase the level of awareness of this important part of modern history. It’s incumbent for the commission to ensure that the persecution of gay people is included in the memorial, perhaps with the inclusion of the pink triangle.

I am pleased that the Deputy Prime Minister Nick Clegg, following a call from PinkNews, has become the first party leader to back the symbols of gay oppression to be included in the National Holocaust Memorial. Today he told PinkNews: “The symbol of the pink triangle, once intended as a badge of shame, today stands as an international symbol of freedom and pride. From the dark shadow of history rises a neon emblem of diversity and hope.

“Any memorial remembering the Holocaust should recognise the persecution of non-Jewish victims whilst maintaining the centrality of the six million murdered Jews.”

If this happens, and there is every indication that it is possible, Britain would join Germany, the Netherlands, Israel, Australia and the US with a permanent memorial to the Nazi’s crimes against gay people and a reminder that it must never happen again. Here, or anywhere in the world.

Benjamin Cohen is the Chief Executive of PinkNews. A version of this article first appeared in this month’s GT (Gay Times) where Benjamin writes a monthly column on politics and current affairs. The edition featuring this column is in good retailers now.